Ethiopia and the Nile​

Ethiopia and the Nile

The talk of day in Ethiopia is about power shortage and rationing that has Impacted the socio-economic fabric of the country. It was inevitable that This shortcoming was on the radar of Ethiopian Electric Power (EEP), the Power plant generator and operator in Ethiopia, for many decades. Let us Examine the history of the Nile and Ethiopia’s revival in upgrading its Power needs and effective use of the Nile river equitably and responsibly.

When the Italian government made a reparation payment of 40 Million USD under the War Reparations Agreement between the two countries, the Government of Ethiopia (GoE) used 75% of the payment to build the first Koka Hydro Power generation plant. It was on May 28, 1958 that His Majesty, Emperor Haile Selassie laid the foundation stone for the construction of the Koka hydro-electric project which generates 54MW. Ethiopia is blessed with the abundance of natural resources, and the prolific amount of annual rainfall makes her relevant to be called “The water tower of the Horn of Africa.” Today Ethiopia generates more than 4260 MW and expects to increase to 17,000 MW by the end of GTP (Growth Transformation Plan) III; equally, the population of Ethiopia has increased from 25 Million in 1957 to 110 Million today.

Africa’s longest river, the Nile, is a lifeline for Ethiopia, Egypt, South Sudan, the Sudan, and Uganda and is already a source of significant geopolitical tensions aggravated by the numerous large-scale irrigation projects in the region. In 1959, Great Britain brokered a colonial deal that divided the water rights between the Sudan and Egypt. Egypt gained more than the Sudan while other countries were completely excluded. Egypt was allocated three quarters of the average annual flow, while the Sudan was allocated a quarter of the available resources. 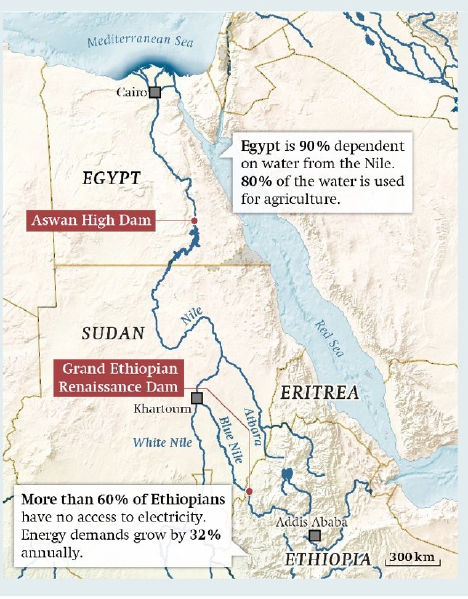 Life in the 21st century has changed immeasurably in comparison to1959, in which the British government allotted Ethiopia’s water resource to her colonies, Egypt and the Sudan, more than 75 billion metric cubes of the water resources by volume. In this equation, the British knowingly and carelessly made this decision so that this will remain a wedge between the neighboring countries on how to utilize the Nile river resource after the independence of Egypt and the Sudan. I truly believe that Egypt is trying to push the 1959 failed agreement, and this is not acceptable to current generation of Ethiopians primarily because Ethiopia is excluded from the original agreement, yet is a main contributor of the Nile water, 80% of the water to be exact.

Most of the 80% of the Nile water that originates in the Ethiopian highlands derives from rainwater and flows into the river between June and August. The colonial treaty allocated 55.5% to Egypt and 18.5% Sudan (25% is not left for the other riparian countries). The 1959 Agreement to which Ethiopia and the rest of Sub-Saharan non-Arab countries were not party to allocates  55.5 Billion Cubic Meters  of water to Egypt and 18.5 Billion Cubic Meters  of Water to the Sudan. As an Ethiopian, I feel that Ethiopia should use the Nile River to expand her own power generation projects, the likes of the GERD and others that are awaiting funding. In addition, water irrigation projects along the tributaries of the Nile river will help with growth and development. 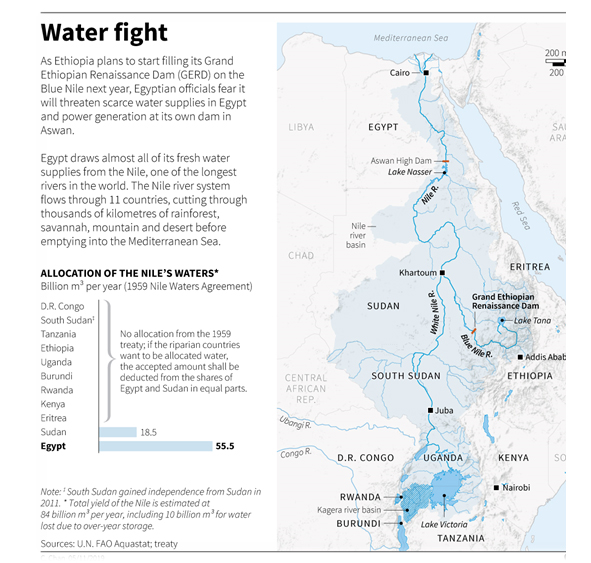 Egypt’s colonial position of “historical and natural rights” over the Abbay River and other tributaries of the Nile is no longer a winning proposition. These challenges have significantly affected Ethiopia’s right to use the waters of the Nile with no compensation as well as its effort to keep its stability and security. That greed-driven objective, however, is not losing its momentum mainly because of Ethiopian’s continued economic development and political stability, in particular during the last 20 years. It has become more and more evident that Ethiopia can’t be stopped from using all its resource, including the Nile water. Egypt is not only dependent on waters of the Nile, but also on the fertile soil which the various tributaries that feed the Nile carry with the annual floods from Ethiopia.

It is time that the Egyptian government needs to consider, in a thoughtful and comprehensive manner, to create a regional and international platform suitable for an equitable utilization of the waters of the Nile. The two countries need to introduce step-by-step approaches of economical and fair utilization of the water resources.  Egypt must replace the ignorant and suspicious approach with an informed and inclusive policy, and it is important that focus should be on security, development, democracy, and peace. The government of Egypt is using all kinds of tactics to misguide the discussion which was evident in the latest negotiation conference by continuing to interject and refer to the 1959 Agreement sponsored by the British government. Egypt knew more than a decade ago that the day will come that the Nile basin users will challenge her positions of using the unequitable share of the Nile resources. Today, Egypt is developing 35 desalination plants of which 16 are earmarked as urgent; Egypt is anticipating a reduction in the Nile River water flows when Ethiopia completes the construction of the Grand Ethiopian Renaissance Dam (GERD) and bring online the water irrigation projects.

Valuing the increasing need of the Egypt, the Ethiopia and the Sudan for their over-border water sources, and realizing the importance of the Nile River as a source of life and a vital source for the development of the people of these neighbors, the lack of agreement on the filling and operation of the dam has become an impediment.

It is time for Egypt to realize that the agreement signed in 1959 is not an agreement that benefits Ethiopia today. Ethiopia intends to use the Nile water resource in equitable portion to advance the needs of the citizens.

Egypt has to understand that, for Ethiopia, the Nile River is the source of life for its 110 million inhabitants. Ethiopia will use this valuable resource in a rational and cooperative way among its neighbors. In fact, the downstream countries can benefit tremendously by purchasing energy generated by the GERD.

There are already 58 plants operating in Egypt, representing 440,000 m3/d. Once the building programs are complete, the country’s total desalination capacity will be 1.8 million m3/d. Egypt is stepping up efforts to address water scarcity, pledging EGP 900 billion ($51 billion) for a national water management plan over 20 years.

Egypt is the second largest power producer of 38,800 MW on the continent of Africa. The share of the hydropower that requires water is less than 2,800 MW, which is 7% of the total distributed power generation used by the country. Unlike Ethiopia, Egypt uses mixed power sources that includes 38%-Natural gas, 32% CCGT, 20%-Gas, 7%-Hydro, 3%-Renewables; unlike Egypt, Ethiopia produces, 4260 MW 90.4% – Hydro, 7.2%-Wind, 2.1%-Diesel, <0,02% Geothermal. Referring to the above analysis, it makes it clear that Ethiopia cannot afford to stop focusing on building and completing the GERD and other hydropower projects on the Nile and other rivers, Geo-thermals, and Renewable energy sources. The advancement of Egypt in the implementation and focus on desalination plants gives me the confidence that Egypt can boost its water resource opening the door for Ethiopia to use more water, I feel that Ethiopia has to use this leverage to negotiate with Egypt in firming her position to get equitable share of its resources. The abundance of water in Egypt, will lead for Ethiopia to move swiftly in the usage of the Nile river for a number of water irrigation projects that are ready for implementation and accelerate the advancement of the Growth Transformation Plan III.

Egypt has been engaged in a destructive path creating obstacles at every front to the Construction of Ethiopia’s Renaissance Dam defying logic and sincerity and threatening and encouraging conflict is not beneficial for the government of Egypt. Instead opening dialogue in order to pave the path for cooperation and trust will accelerate a path for resolution and, by default help the Egyptians frame the benefits by cutting water loss due to evaporation at Lake Nasser. Storing more of that water in the reservoir behind Ethiopia’s Renaissance dam could cut 10% water evaporation loss annually from Lake Nasser. In the early days of filling the dam, it is clear that it will cut Egypt’s electricity generation capacity, however Ethiopia can facilitate the loss gap to share electricity from its new dam, which is already in the Ethiopian Electric Power (EEP) 25 year power generation and distribution plan supplying power to Sudan and Egypt via the East African Grid (EAG).

In addition, the Sudan could also benefit from the Renaissance Dam and a more even water flow, reducing the risk of flooding and increasing the potential for irrigation.

Finally, by 2037 the Ethiopian Electric Power (EEP) future plans call for, a power generation capacity that will enable Ethiopia to sell more than 3000 MW to our northern neighbors that includes 1000 MW to the Sudan, 2000 MW to Egypt by connecting to the East African Power Grid. I believe such an approach will be a win-win to the three countries that can bring peace, stability and cooperation and make a lasting impact to all the participants of the Nile Basin countries.

In conclusion, Ethiopia does not need the US Government and the World Bank to broker the tripartite negotiations because they have not shown even handedness during the current negotiation. This is an African problem and has to be dealt by African prominent leaders and organizations.

Image credit: All images used belong to the owners of the content