Ethiopians do not know the value of their water resources; they have yet to realize it.

In the last nine years issues related to Ethiopia, Egypt, and the Nile river have dominated international news, some with alarming headlines foretelling world water war. Almost all news items required detailed historical background knowledge, demanded skill to understand international transboundary laws and agreements, and mandated an ability to decode technical details. With this piece, I will try to keep the explanation at a high level and discuss the River Nile, Ethiopia’s current destitute situation, Egypt’s role in keeping Ethiopians in poverty, and recommend the best way forward for Egypt to temporarily tap in to her 160 BCM High Aswan Dam water reservoir while Ethiopia fills her GERD reservoir.

The Nile is made up of two rivers, the Blue Nile and the White Nile. The Blue Nile, locally known as The Abay, originates in the Ethiopian highlands. It crosses over a large land mass and contributes up to 60 billion cubic meters (BCM) of water annually. The White Nile originates in Uganda and contributes about 14 BCM. The two rivers join in Khartoum, Sudan, and continue to flow from south to north through Egypt and finally into the Mediterranean Sea completing a journey of over 6000 kilometers.

Ethiopia has over 100 million people and it is one of the poorest countries in the world. Ethiopia is often remembered by the devastating famine of 1984, and 35 years later the fate of her people has hardly improved. Though Ethiopia is not currently facing famine, a large number of the population is malnourished, encounter a recurring drought, and suffer from perennial food shortages. Despite having millions of hectares of irrigable arable land and fresh river waters, Ethiopians are completely dependent on seasonal rain and literally live in the dark because of the lack of electricity. They burn wood for heating and light and use cow dung as fuel for cooking. 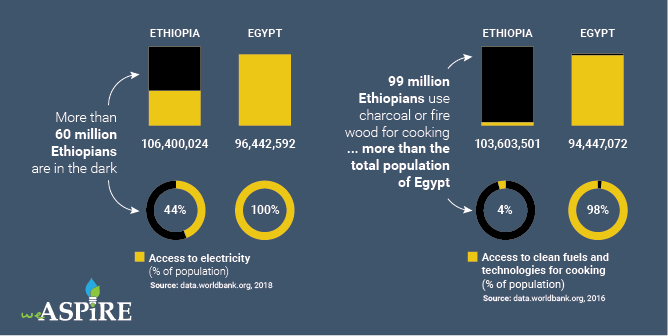 The macro economy has suffered as well. Ethiopia’s GDP is a meager 100 billion USD, and the country earns only 4 billion USD a year from exports. Imports are over 15 billion USD annually. Ethiopia’s skyrocketing population is projected to reach 205 million by 2050. This will exacerbate the shortage of food, health care services, and drinking water supply. In addition, challenges exist related to deforestation and climate change. Life for Ethiopians will not get better any time soon. Egypt continues to vehemently challenge Ethiopia, refusing to accept an equitable use of the Blue Nile, which would allow Ethiopia to map out a path to lift its vulnerable population out of poverty.

Egypt borders the Red Sea and the Mediterranean Sea. It maintains over 150 trillion cubic meters (TCM) of underground water reserve and has stored 160 billion cubic meters (BCM) of water in her High Aswan Dam (HAD). Yet, Egypt continues to completely depend on the Nile River as her single source of water. To guarantee the supply of the Nile waters, Egypt outlined five strategies aimed to deter and prevent Ethiopia from using her own Blue Nile waters.

These five strategies included direct invasion, encircling Ethiopia by hostile Arab league member nations, fostering and supporting internal conflict and destabilization, working with world leaders and financial institutions to deny finance, and overt and covert threats to take military action. Egypt started carrying out all her strategies, starting in 1875 and continues implementing them to the present day. Egypt invaded Ethiopia in 1875/1876 and suffered a resounding defeat. Egypt has sponsored and encouraged Djibouti, Somalia, Sudan, and Eritrea to join the Arab league and provides them with military and financial support.

For the last 70 years, Egypt has interfered in the internal political affairs of Ethiopia and provided military, financial, and political support to liberation fronts and political groups operating within Ethiopia. During the same 70 years, Egypt colluded with world leaders, including the USA, Russia and the Arab league countries, and financial institutions, like the World Bank, to deny financing to Ethiopia for any planned projects over the Blue Nile. To this end, Egypt even signed the Camp David agreement officially recognizing Israel, becoming the only Arab country to do so in the process. Lastly, Egypt built a large army and acquired expensive armaments from the USA and uses it to threaten military action against Ethiopia. These strategies have been very effective and have enabled Egypt to monopolize the use of the Nile waters and have allowed her to enjoy veto power against all projects by any upstream country.

Fortunately, starting in 2011, Ethiopia managed to overcome almost all of the five Egyptian obstacles, and successfully commenced the construction of the Grand Ethiopian Renaissance Dam (GERD) on the Blue Nile (Abay river). This hydroelectric dam is fully financed by Ethiopians and is designed to generate 6400 MW of electric power. The GERD project is now estimated to be over 70% completed and filling the reservoir is scheduled to begin by July 2020.

Egypt opposed the project from the get-go and “tried to stop the unstoppable.” And now Egypt is demanding the GERD reservoir filling must be spread over 21 years. The total annual flow of White Nile and Blue Nile is estimated to be 74 BCM, and all of it is shared exclusively between Egypt and Sudan. Though the Blue Nile water originates within Ethiopia’s borders and contributes about 60 BCM to the Nile flow, Ethiopia has never been allowed to use even an ounce of water from the Blue Nile. This has kept generations of Ethiopian stuck in a cycle of poverty. This is immoral, criminal and must not go on even for a day if we could change it.

Egypt must abandon her colonial, monopolistic mindset that devalues the lives of Ethiopians. Egypt is better off realizing that her sinister strategies that have successfully deterred Ethiopians for 120 years are no more. This realization would help Egypt to negotiate in earnest and it will enable her to protect her long-term interest. A good start is for Egypt to not only accept the building of GERD but to also help Ethiopians start using their water resources immediately to prevent hunger, to speed up electrification, and to restore forestry that guarantees rain that would result in more water flow into the Nile River.

The best way forward is for Egypt to agree to use some of her 160 BCM of water stored in the HAD reservoir while Ethiopia fills her 79 BCM GERD reservoir. Agreeing to a win-win proposition builds trust between Ethiopians and Egyptians. This will not redress the injustice suffered by Ethiopian for the last 120 years as the result of Egyptian activities, but it will usher in an era of equitable sharing of the mighty Nile presenting benefits for all concerned parties. It will also make other negotiations easier to reach an agreement, including the future GERD operational condition negotiation.

Justice has been denied to Ethiopians and their right for equitable use of their own Blue Nile waters has been delayed because of Egypt’s malicious conspiracy and deliberate actions. Egypt must discard her old strategies and, instead, accept an approach that is fit for the times and that is best to protect her long-term national interest. Egypt should agree to use her waters stored in her HAD reservoir while Ethiopia redirects enough Blue Nile waters, and uses it to fill the GERD’s reservoir as quickly as possible. This will likely last about three years, and after the GERD reservoir is filled, then the Blue Nile water will start to flow to Egypt uninterrupted like it has for thousands of years.