How GERD can transform power provision in the Nile Basin

A wind of change is blowing through the Nile Basin. After a decade of construction, Ethiopia completed its second filling of its Grand Ethiopian Renaissance Dam (GERD) on July 19, 2021 allowing it to begin generating power in August or September of this year. Doing so has tensed relations with downstream riparians Sudan and Egypt, who have expressed concerns over their water security. The countries’ dispute over the Nile waters is underpinned by an inequitable water sharing status quo (explained very clearly here by scientist and water management expert Dr Tirusew Asefa) that allocates no water for Ethiopia or other upstream riparian states. These tensions take center stage in discussions on interstate relationships in the Nile Basin, often overshadowing the opportunities for cooperation brought by GERD. Beyond the well-known benefits of the dam to downstream countries​​—including flow and sediment control resulting in increased irrigation and hydropower production, flood mitigation, and reduced evaporation loss and enhanced water storage—GERD could transform not just Ethiopia’s power sector, but that of the broader region. Ethiopia’s dam presents the most substantial opportunity for electricity-based cooperation between Nile Basin countries.

Once it meets domestic energy demand, Ethiopia will be able to trade excess generated power with its neighbors through the East Africa Power Pool (EAPP) project, an interconnection of eleven countries’ electricity grids in Eastern Africa, including Egypt and Sudan. While the intergovernmental MOU to establish EAPP was signed in 2005, electricity trading has been low, despite Ethiopia exporting power to Djibouti, Sudan, and Kenya. GERD can significantly scale up existing regional electricity trade and create new partnerships. In the short to medium term, Ethiopia can increase power exports to Sudan which, in turn, can export to Egypt, and both can take advantage of needed, cheap hydroelectricity. In the long term, as new energy projects develop, GERD and EAPP can bring a vibrant cross-border electricity market to life, lifting hundreds of millions of Africans out of poverty. 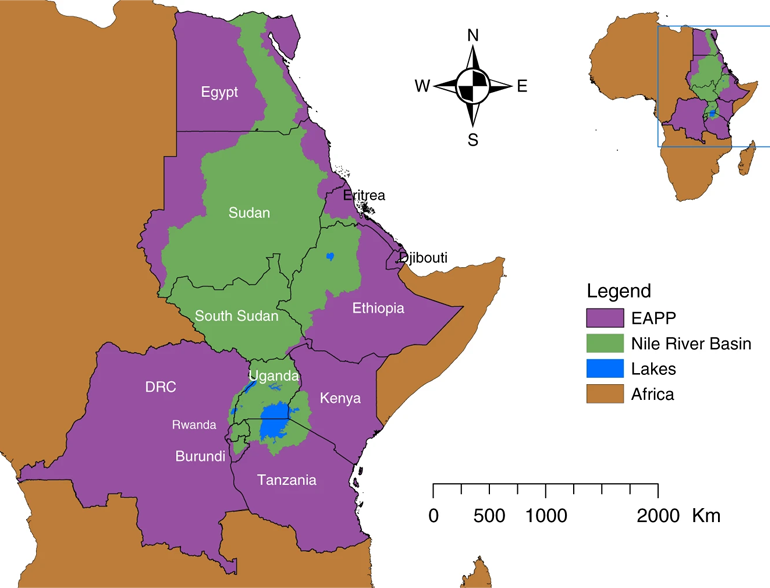 Ending Energy Poverty in Sudan
Sudan’s incentives for using integrated electricity are clear. Only 54 percent of the country’s 43 million residents have access to electricity, and its demand for power will increase significantly as it ramps up production in agriculture and industrial manufacturing. Sudan has also already established interconnectors with a capacity of 200 megawatts (MW) to import electricity from Ethiopia and may seek to do more in the future. In June 2019, the country’s total available power capacity was just 2,800 MW to service a peak demand of 3,800 MW, leaving a deficit of 1,000 MW. This forced the country to ration power which continued through 2020 and this year, with load shedding (electricity generation not meeting demand) and fuel shortages contributing to political dissatisfaction and instability.

Further, it is expected that in an integrated power market, the supply increase from GERD would drive down electricity prices, Ethiopia can sell electricity to Sudan at just $0.04 per kilowatt-hour (kWh), half the normal price of electricity in Sudan. Indeed, importing electricity from Ethiopia at a low price per kWh could support rural electrification, irrigation, and displace fossil fuels which are more expensive after the country repealed its fuel subsidies. It may have the ability to pay for these imports using its newfound $14 billion in debt relief from international creditors. Power trade offers Sudan a chance at lifting itself out of energy poverty and into an industrialized future.

Clean Energy & Energy Security in Egypt
On the other hand, Egypt’s need for cheap hydropower is less obvious but still very relevant. Since 2016, 100 percent of the 100 million residents of the ancient nation have had access to electricity. According to the latest annual Egyptian Electricity Holding Company (EEHC) report, Egypt had a total installed capacity of 58 gigawatts (GW) connected to the national grid and generated 199,834 gigawatt-hours (GWh) of energy in 2019. The nation consumed 151,908 GWh, making it the single largest electricity user among EAPP member states. Egypt, unlike Ethiopia and Sudan, does not have an energy poverty problem.

However, Egypt faces significant challenges in its electricity sector that integration and hydropower can help address. To begin, according to EEHC, over 90 percent of Egypt’s generated power comes from thermal sources (oil and natural gas), while only 6 percent and 2 percent come from hydropower and other renewables respectively, since the High Aswan Dam (HAD) mostly serves as a flood protection and irrigation dam rather than a hydroelectric plant. Egypt has also been a net importer of oil since 2011, with an increasing deficit between its consumption and production. 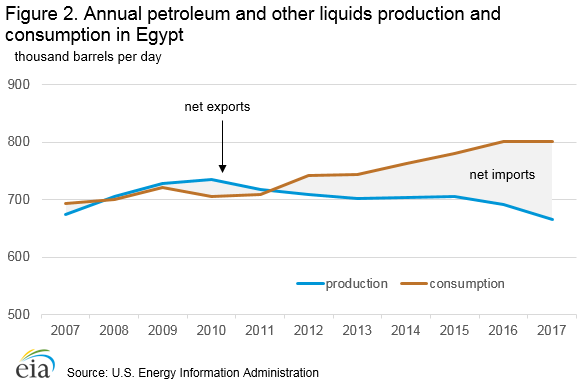 Given that oil makes up 38 percent of its consumed energy, the country’s power mix exposes it to global oil supply shocks and rising prices following the pandemic’s global economic effects. In fact, in April, Egypt’s oil ministry was forced to increase domestic fuel prices according to international market movements for the first time in two years and since lowering them under pressure from popular protests in 2019.

Additionally, 54 percent of the country’s energy consumption comes from natural gas, which it produces domestically, threatening its decarbonization commitments for the Paris Agreement. Indeed, Egypt’s CO2 emissions reached 250 million tons in 2018, placing it among the thirty highest emitters in the world in terms of energy-related emissions. An estimated 40 percent of those emissions came from its electricity generation sector. In order for Egypt to meet its goal of having renewables comprise 20 percent of its electricity mix by 2022 and 42 percent by 2035, cooperation with Ethiopia and other EAPP states will be critical.

The Opportunity for an Ethiopia-Sudan-Egypt Interconnection
Ethiopia is naturally endowed with massive hydropower potential, making it a major contributor to regional electricity trade. It’s important to note that the GERD’s deeper and narrower reservoir loses just 1.7 billion cubic meters (BCM) annually to evaporation compared to that of HAD which loses 12 BCM per year. This is worth noting because less volume of water lost to evaporation means more water can produce useful work. Moreover, it is expected that as global temperatures rise due to climate change, water consumption will increase, so the burden of hydropower generation will shift toward GERD, whose reservoir will minimize evaporative losses, rather than HAD.

An August 2020 model found that a 3 GW Ethiopia-Sudan-Egypt interconnection could allow Egypt and Sudan to deploy additional intermittent renewable energy such as wind power and solar photovoltaics (PV), while also increasing their energy imports from Ethiopia’s dam to phase out fossil fuels and meet increasing energy demand at lower costs. The integration of wind and PV with hydropower in the three countries could also allow for cross-border electricity trade that is optimized for the seasonal complementarity of intermittent renewables and hydropower in the region.

Overall, trading electricity can boost economic integration and electrification in the three countries. This could establish a foundation for infrastructure development, legal and regulatory coordination, stronger political relationships, as well as enhanced institutional and technical capacity in the region, fully embracing the spirit of Pan-African cooperation.

What Lies Ahead
GERD marks the genesis of a new order in the Nile Basin, not just in terms of water utilization, but also electrical integration, trade, and economic development. The main incentive for African states to pool power is to increase electricity generation while mitigating future greenhouse gas emissions and ensure grid reliability, with lower capital and operational costs. EAPP can also standardize power purchase agreements and increase contract transparency, therefore providing the appropriate institutional framework for an integrated East African power market.

A reliable grid requires a diversified energy mix; thus, EAPP can foster clean energy development such as PV, wind, hydro, and geothermal, lowering power sector emissions. Integrating markets can also expand energy demand beyond domestic markets, allowing megaprojects like GERD or Egypt’s 1650 MW Benban Solar Park to take advantage of economies of scale. Interconnections between power infrastructures can lower the overall risk and cost of capital in the sector, stimulating domestic and international investment. This is also empirically correct; the same model estimates that EAPP power trade could add as much as $18.6 billion to the East African economy and reduce CO2 emissions by 30 percent by 2030.

A major concern for EAPP, however, is hydro-climatic variability in the Nile Basin. Research finds that major droughts induced by climate change could affect trade negatively, especially for hydro-dominant systems like Ethiopia’s. Thus, EAPP member states must create an integrated system consisting of a diversified set of power sources to safeguard the power sector from climate impacts. Cross-border electricity trade is essential to establishing this integration and efficiently distributing power to where it is most needed.

GERD heralds the emergence of a new era of electrification, development, and cooperation. Ultimately, the interplay of geopolitical conflict over water sharing and the lucrative potential for electricity exchange means that the Basin will see great change in the years to come. EAPP represents the region’s greatest opportunity to harness its natural resources for electrical and economic development, and GERD may just be the spark needed to wake it from over a decade of dormancy.