The GERD is everything that Africa aspires for!

Home
>
News
>
The GERD is everything that Africa aspires for!

If we do not approach the problems in Africa with a common front and a common purpose, we shall be haggling and wrangling among ourselves until we are colonized again and become the tools of a far greater colonialism than we suffered hitherto.

The Grand Ethiopian Renaissance Dam (GERD) is a flagship project not only for Ethiopia but also for all of Africa and therefore deserves the support from the African Union (AU), the member states as well as from all Africans in the diaspora.  In this aspect it is everything that Africa aspires for. 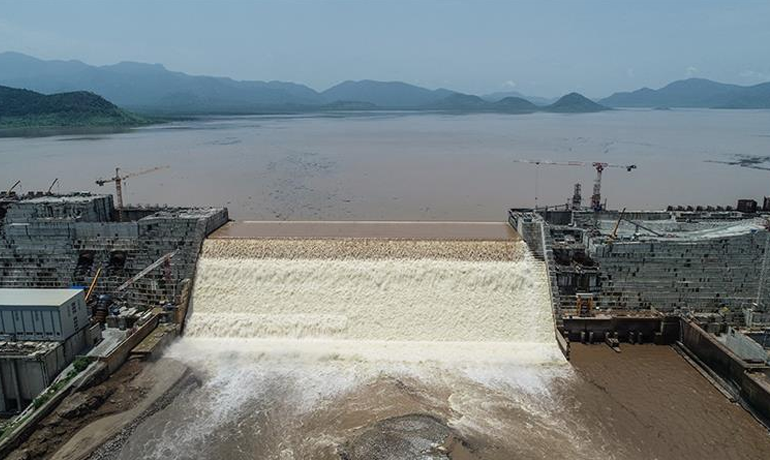 A Pan-African Project
In May 2013, on the wake of the golden jubilee of the establishment of the African Union (formerly the Organization of African Unity), the continent re-dedicated itself to “the Pan-African Vision of an integrated, prosperous and peaceful Africa, driven by its own citizens, representing a dynamic force in the international arena.” Subsequently, the proposed initiatives were adopted in 2015 as part of The Africa We Want, Agenda 2063 masterplan.

Agenda 2063’s vision upholds  seven aspirations. A prosperous Africa based on inclusive growth and sustainable development; an integrated and politically united continent rooted in the ideals of Pan-Africanism and African Renaissance; good governance, democracy and respect for human rights, justice and rule of law; a peaceful and secure Africa; an Africa with a strong cultural identity, a common heritage, values and ethics; an Africa focused on people driven development especially women, youth and children; and a strong, united, resilient and influential global partner.

Agenda 2063 is a 50-year strategic document with priorities and goals set within it to be implemented every ten years.  In order to meet these goals, the AU with its partners have come up with the first 10-year plan (2013-2023). These are an integrated high speed train network, an African virtual and e-university, an African commodity strategy, an annual African forum, an African continental free trade area (AfCFTA), an African passport, the free movement of people, the establishment of African continental financial institutions, the execution of the Grand Inga Dam power project, the Pan-African e-network, ending wars, civil conflicts and genocide (Silencing the Guns by 2020), an African Outer Space strategy, and a single African Air transport market.

GERD: A symbolic project of Agenda 2063
As such Ethiopia’s, flagship project, the Grand Ethiopian Renaissance Dam (GERD) launched in 2011 encapsulates the aspirations outlined in the goals of Agenda 2063 ‘s The Africa We Want strategic plan.

The seven aspirations of Agenda 2063, each with its own goals and priorities reflect Africa’s desire for shared prosperity and well-being, for unity and integration, for a continent of free movement of its citizens and expanded horizons, where the full potential of women and youth are realised, and with freedom from fear, disease and want.

Agenda 2063 is based on the belief that a prosperous Africa can only be realized when Africa is determined to eradicate poverty for this generation and the next, and when Africa can enable shared prosperity through mutual collaboration and economic transformation for the continent. The GERD, in this regard, tackles the need for economic independence – one of Africa’s Achilles’ heels. It will generate electricity that addresses the basic need of industrialization that will in turn create jobs and ultimately enable the continent to deliver quality healthcare services through an improved economy. Furthermore, the GERD project is environmentally sustainable as it is built on the highlands of Ethiopia resulting in net water loss through evaporation which is estimated to be about ten times less than of the Aswan High Dam, one of the hottest places in the world.

A Pan-African spirited continental integration is based on liberation, political, and economic independence. The Grand Ethiopian Renaissance Dam, as hinted in the name, is Africa’s renaissance vision that powers the region with electricity and enables it to achieve economic empowerment. The dam, as the late Prime Minister Meles Zenawi said, is “an expression of our commitment to the benefit of all the countries of the Nile Basin.” The Ethiopian dam represents an Africa whose development is a people-driven endeavour relying on the potential of all Africans. The GERD, initiated by the Ethiopian government is 100 percent financed by its people and defies the traditional western-aided-development-approach in the continent. It is also strategically important as Ethiopian nationals from street vendors to investors are stakeholders of the project. Africa’s economic independence, combined with unity will make it a strong and influential global player and partner.  Notably, the GERD will significantly contribute to the economic development of Ethiopia and reshape its position to become a powerhouse in the region.

First, it is to supply the power for the functionality of an integrated high speed train network connecting all African capital cities and commercial centers.  A grid-connected continental cross electric train needs a high-speed rail infrastructure to deploy electric mobility between major cities.  The GERD is a regional power project enabling Ethiopia to sell electricity to downstream and neighbouring countries and also creates essential infrastructure needed to transfer electric power to buying countries.

Second, the GERD’s plan to sell excess power to downstream and neighbouring countries and its creation of infrastructure needed to transfer the electrical power to buying countries is directly in line with the goals of the establishment of the Continental Free Trade Area (AfCFTA) agreement – one of the Africa’s successful projects signed in 2017 and launched in 2020. AfCFTA significantly accelerates growth of Intra-Africa trade and uses trade more effectively to meet the United Nations sustainable development goals.

Third, The Grand Inga Dam on the Inga Falls aims at supporting current regional suppliers and assists their combined service to transform the African continent from using traditional sources of power to modern sources of energy and ensures access to clean and affordable electricity for all Africans.  In the same vein but on a regional level, the GERD can be the source of energy and the provider of technical know-how for countries as close as Rwanda and as far away as Egypt.

Based on the points stated above, it is evident that the GERD creates a harmonization of the goals as set out in the global Sustainable Development Goals (SDGs) and Agenda 2063. Therefore, the GERD is a uniquely symbolic project that realizes the two goals: boost Intra-Africa trade; and supply the necessary product. It goes without saying that GERD is a national, continental and global flagship project that significantly contributes to the betterment of the global community.

Championing “African Solutions to African problems”
Ethiopia has loudly championed the Pan-Africanism principle of ‘African solutions to African problems.’ Historically Ethiopia’s contribution to Pan-Africanism ranges from restoring the dignity of black people by defeating colonialism to ultimately becoming a beacon of hope for a better future. Ethiopia is also one of the founders of the Organization of African Unity, a founder and member of the then League of Nations (now the UN), and has distinguished itself helping African states in their struggle against colonialism and apartheid.  Similarly, in the decade-long negotiation of GERD, Ethiopia has, once again, stood firm on the Pan-Africanism principle of “African solutions to African problems.” By doing this Ethiopia has brought the African Union to the forefront in the face of the world magnifying its mandate, ability, capacity and above all its willingness to lead and solve the GERD negotiations.

The Declarations of Principles (DoPs) signed by Egypt, Ethiopia and Sudan in 2015 underscores that issues related to the dam should be solved within this tripartite setting. Regardless, Egypt took the matter to the U.S, World Bank, the United Nations Security Council, the European Union (EU), and the Arab League, and not initially to the African Union (AU). In the beginning of 2020, Ethiopia made a strong statement that if any fourth-party has to be involved it should be the African Union. In June 2020, talks facilitated by the African Union and under the chairmanship of South African president Cyril Ramaphosa took place but no agreement was reached. Most recently discussions on GERD have been handed over to the chair of the AU for 2021, Democratic Republic of Congo (DRC) President Felix Tshisekedi.

The GERD’s benefit for the Riparian States and the Region
The Nile water is shared by Egypt and Sudan in the downstream and Uganda, Kenya, Burundi, the Democratic Republic of Congo, Rwanda, South Sudan, Tanzania, Eritrea, and Ethiopia in the upper stream. The introduction of the GERD throws light on what has been called the “Dark Continent” as it is believed it will bring many benefits to the Horn of Africa, the Nile basin countries and to the continent as whole.

As per a World Bank report, the power demand of the Nile basin countries for the next five years is estimated to be 32 percent per year and growing by 7 percent more from the last five years average rate. The GERD will play a vital role in providing access for Nile basin countries. So far Sudan, Djibouti, Eritrea, Burundi and Kenya have shown interest to buy power from Ethiopia.

The availability of electricity in the horn and in the Nile riparian states will boost industries and create jobs for the younger population. As per a 2020 International Organization of Immigrants (IOM) report, the East and Horn of Africa contribute the largest number of refugees in Europe and Middle East countries. In addition to the conflict, political and economic crisis, the problem is intensified by climate change and environmental degradation. The GERD project will have a major impact on the mitigation of drought and flood management.

Furthermore, The GERD will be the hub for clean and renewable energy supply for Nile basin countries. As per the World Bank report of 2018, only 48 percent of the population of Sub-Saharan African has access to electricity and 80 percent of the riparian countries are categorized under Sub Sahara Africa except Egypt. Egypt has 100 percent electric access for its citizens followed by Kenya, Sudan, Eritrea and Ethiopia with 75, 60, 50 and 45 percent respectively.

The benefit of GERD to the region is not limited to power supply. It has a great benefit environmentally to the downstream countries by removing silt and sedimentation. It is also obvious that GERD will allow steady water flow throughout the year that increases agricultural production of the downstream, and will increase water conservation and will minimize the water loss in the Aswan Dam.

An equitable and reasonable utilization is a core principle in the distribution of water resources. However, its practical application in the Nile Basin has been a significant challenge, leading to a water allocation deadlock. The Cooperation Framework Agreement is signed by six out of ten Nile basin initiative states, including Ethiopia, Uganda, Rwanda, Tanzania, Kenya and Burundi.

The GERD will also boost Intra-Africa trade and catalyse people-to-people relations in the Horn of Africa and the Nile Basin countries.  The saga of the decade-long GERD negotiation might have been unfortunate for Ethiopia, but it proved that, by championing “African solutions to African problems,” Ethiopia, as historian Robert Hess said, is “the major spokesman for Africa.”  The African Union is known for non-interference on the issues happening in the continent. In this respect, GERD has brought the opportunity for the AU to take matters in the continent in its own hands, sending a signal to the world that Africa is no longer allows non African states to interfere in the continent’s affairs.

In conclusion, the GERD is an all-encompassing Pan-African project that the continent aspires to achieve by 2063. It deserves full support of the African Union and its member states and from the African diaspora. It is a testimony to the dismantlement of colonialism that wrongly imposed outdated colonial treaties and justifies the right of Africans to keep their fate in the hands of its citizens and to chart its own destiny.